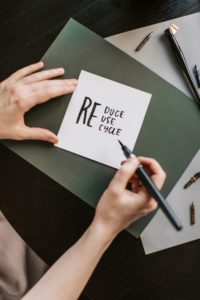 Towards circular economy: European manufacturers are not sufficiently reporting on their actions

After analysing the data from 226 large manufacturing companies from the European Union, a team of researchers from Lithuania, Poland and Sweden have drawn a conclusion that organisations almost do not mention circular economy principles in their environmental reporting. In their reports, the organisations mostly refer to the effective use of primary flows and minimising waste. However, the other principles related to product lifecycle extending and useful application of materials are not sufficiently disclosed, according to a recent study lead by researchers of Kaunas University of Technology (KTU), Lithuania.

Although the idea of circular economy model as opposed to the current, linear economy has emerged as early as 1970s, it gained wider exposure only decades later. In 2015, The European Commission launched the first EU Circular Economy Action Plan.

“Indeed, circularity concept has deep historical roots, the manufacturing organisations have been investing into recycling technologies, were employing environmentally conscious attitude for years. However, only the relatively recent EU strategy made the public and industry more aware of the concept”, says Dr Lina Dagilienė, Head of the Circular Economy Research Team, Professor at KTU School of Economics Business.

Hence, the KTU research team set out to explore how the circular economy principles (in popular language they are communicated through 4R’s – reduce, reuse, recycle and recover) are reflected in the environmental reports of the manufacturing companies across Europe. Employing qualitative content analysis and statistical methods (ANOVA and PCA), researchers collected original empirical evidence from 226 large manufacturing companies whose environmental impact reports were published on GRI (Global Reporting Initiative) Sustainability Disclosure Database. GRI is the independent, international organisation that provides the world’s most widely used standards for sustainability reporting. While selecting the companies, the research team drew on the EU definition of a large company, i.e. having more than 250 staff, a turnover of more than EUR 50 million or a balance sheet total of more than EUR 43 million. Although there were 1001 large EU organisations in the Database, the study focused only on manufacturing companies due to their obvious impact on the environment.

“Reporting the company’s environmental impact is a formal way for the organisations to tell about their other activities than those related to the financial matters. As manufacturing organisations are often criticised for their impact on the environment, these reports provide them with the possibility of explaining to the public how they are changing, in what initiatives they are participating, how they are involved in the lives of communities and society”, says Prof Dagilienė.

According to her, there is a substantial body of research proving that investors are paying great attention to this kind of reporting – sometimes called social responsibility, sustainability or environmental impact report – while making their decisions.

However, the research lead by the KTU team revealed that the companies tend to focus on reporting on their ecoefficiency, i.e. using less raw resources and reducing their greenhouse gas emissions than on any other aspects of circular economy. The text analysis, where Reduce, Reuse, Recycle, Recover and Circular Economy were the keywords used to indicate the amount of textual CE information in the reports, revealed that mainly reduce (of emissions, energy) is reported and the disclosures of reuse, recycle and recover information in the reports are not sufficient from the CE point of view. The resource efficiency approach implemented through the minimization of raw (critical) materials, creation of shorter loops and closed loops by the use of secondary raw materials is weakly reflected. It means that environmental reporting wil have to change to reflect circularity.

“We are talking about large companies here, about the industry leaders, the trendsetters. Therefore, it is somewhat surprising to find out that these companies are not inclined to report about the innovative business models, which would increase the longevity of their products or about the recycling technologies implemented in their production cycle. These activities were mentioned in some of the reports, but only fleetingly, not as a common practice”, says Prof Dagilienė.

According to her, there might be a couple of reasons to this. Firstly, the study is based on the external information, i.e. publicly available GRI reports, not on interviews with the organisations or internal documents. Secondly, the organisations are following the GRI guidelines for preparing their environmental impact reports, and the guidelines for 2020 have no clear indication on how the circular economy principles should be reflected upon in the environmental impact reports. Hence, the implications of this research for the professional organisations, the facilitators of the non-financial information disclosure procedure could be: to include CE into the official guidelines on how to report circular economy environmental impact.

“While conducting this research, we were fully aware that circular economy is a relatively new term and we might not be able to find direct references to it. Therefore, through the content analysis and the analysis of the companies’ key performance indicators we were looking at the CE principles – how they are reflected in the organisations’ activities. For example, some of the researched companies were from the food and beverage sector, where the recycle principle for diminishing food waste and recovery of food raw materials might be applied. However, there was no much communication on these activities in the reports”, says Prof Dagilienė.

Researchers are not inclined to say that any of the 4 R’s is more important than the others. Using less raw resources and reducing emissions is crucial in order to optimise the manufacturing process. However, as much as 80 percent of the environmental impact takes effect in the product design stage: before releasing the product into the market the manufacturer needs to be aware of its full life cycle – how long the product will be usable, what parts can be recycled, how the disposed products can be collected and reused again.

“Interestingly enough, those industries, which are considered the most controversial, such as alcohol, tobacco and those, which are considered the most polluting, such as mining or textile industries are more prone to communicate about their steps toward sustainable production. For example, Tom Hilfiger brand has already announced that they are switching to entirely circular production by 2030”, says Prof Dagilienė from KTU School of Economics and Business.

According to her, all the industries would benefit from wider communication about the implementation of circular economy principles in their activities as the consumers all over the world are becoming more aware of the environmental issues.

The article “Wise managers think about circular economy, wiser report and analyze it. Research of environmental reporting practices in EU manufacturing companies” was published in Journal of Cleaner Production, Volume 274, on November 20, 2020. The research was carried out by the scientists of Kaunas University of Technology, Lithuania, the University of Lodz, Poland and Linnaeus University Sweden.