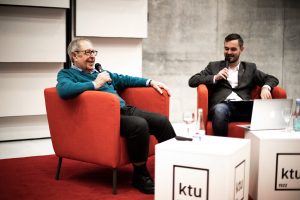 David Gluckman, a marketing guru from Ireland, inventor of the world’s most popular liqueur Baileys Irish Cream Liqueur, says, that it is nonsense to present several different solutions for one problem.

Presenting the stories from his experience to the students, academics and marketing experts at KTU Santaka Valley, David Gluckman said, that for his clients he always had just one and, which is the most important, complete idea.

“I think if you are in the idea business, it’s really quite easy to come with 6 possible answers, but coming up with one is the real challenge. And that’s what you have to do. If anybody comes to me with 6 ideas I say go away, tell me what you really think, tell me what you really suggest. It’s not going be perfect, it never is perfect, but if it’s the best that you can do, that’s good enough”, during his lecture said David Gluckman.

Completeness of idea (new product/brand), according to Gluckman, is also very important while presenting it to consumers.

“Always present something that a consumer will see out of the supermarket”, said renowned marketing expert.

Marketing research is the great predictor

Gluckman is convinced, that market research is the best way to waste an alarming amount of a company’s money. To test his idea of Baileys Irish Cream Liqueur, he just put two bottles of finished product at a local pub just to see if someone will be interested to taste it. 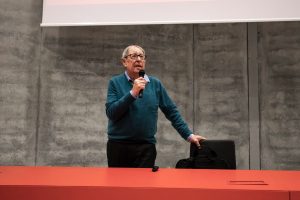 “You don’t really need the market research to check if an idea will work. Four focus groups is more than enough. I always research my own ideas, presented brands as if they existed, I never asked the consumers to design brands for me, I never did beauty contests, I never asked people do you want this, this or this, I said – this is it, is out for the market, this is how much it costs. Do you want it or you don”t? What’s bad or good about it? Consumers, as much as I respect them, are uninterested and inexpert when it comes to evaluating the brands in focus groups”, claims Gluckman.

According to him, doing your own research of a brand, allows you to understand when to stop.

The buyer of an idea is the real hero

According to the inventor of Baileys, it is really important to present an idea directly to the CEO of a company, because they have the right to make quick decisions.

“The real heroe is not the one who has an idea, but the one who buys it. We were dealing with CEOs who made the decisions quickly. Ideas only worked when they were commissioned by top management”, said Gluckman.

All the successful ideas of David Gluckman were always based on simplicity. Therefore, he is convinced that this is the key to real success.

“The best ideas aren’t hidden in shadowy recesses. They are right in front of us, hidden in plain sight. Innovation seldom depends on discovering obscure or subtle elements but in seeing the obvious with fresh eyes”, said the world-famous inventor and marketer.