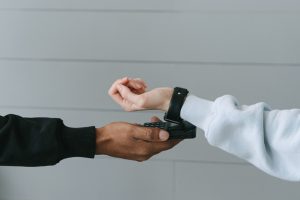 As many as 96% of consumers around the globe say that customer service is one of the most important factors in their choice of loyalty to a brand, while 48% of respondents reveal that they expect specialised treatment for being a good customer. The statistic illustrates that the additional value is what helps to differentiate various products in the customers’ eyes. Therefore, the researchers of the “In4Aact” project at the Kaunas University of Technology and Girona University decided to investigate, how modern manufacturing companies can complement products with services that could help differentiate them among customers.

The joint study of the Kaunas University of Technology and Girona University under the project of ERA Chair “Industry 4.0 Impact on Management Practices and Economics” (further – “In4Act”) raised the question – how manufacturing companies can avoid the commoditisation trap, when exceptional and high-value products become treated as commodities?

One of the most promising ways to avoid this phenomenon, according to the research, is to complement products with services.

“Eventually, most of the manufacturing companies confront the situation when exceptional and high-value products become treated as goods that could be acquired elsewhere. For example, “Dell” once offered the possibility to buy unique, customisable laptops in just one week. Such a unique offer enabled “Dell” to become one of the biggest laptop providers until others also started offering the same service and customisable laptops became a widespread commodity. One of the most promising ways to avoid the commoditisation trap is to complement products with services that could help differentiate products in customers’ eyes by offering additional value,” says Mantas Vilkas, a researcher at the Kaunas University of Technology School of Economics and Business in the “In4Act” project.

“We chose to analyse 500 manufacturers from engineering industries out of more than 2,300 companies we have contacted in the first place. We sought to learn, whether all companies that complement product innovation with service innovation succeed. If not, what are the differences that make companies succeed or fail?” says Vilkas.

What is interesting, the findings of the research showed that simple product support services, such as installation, or maintenance, negatively influence firms’ financial performance. It could seem that these services are expected by default, but most organisations provide them as part of the product offering at their own cost, informs Vilkas.

“The customer support services, such as remote monitoring of the product condition, or product usage training services, on the other hand, have a positive effect on financial performance,” says Vilkas.

The importance of digitalisation

One would say that engineering companies have the advantage over the furniture or textile industries. Maybe. However, smart furniture and apparel may be closer than you would imagine.

Digitalisation, according to Vilkas, is the ability to mesh physical and digital materiality. Product companies develop digitalisation capability by digitising their internal operations first. Intelligence, connection, and analytic capabilities make up the core of digitalisation.

“Intelligence capability denotes organisational ability to augment processes with software and embed them with hardware components that sense and capture information with low human intervention. Connect capability indicates the ability to connect processes internally and externally with core customers and suppliers through wireless communication networks. Finally, analytic capability helps transform the data into valuable insights and actions for faster decision-making and improvement of process performance. When a company develops inside-facing intelligence, connection, and analytical capabilities, then and only then it is time for customer support service innovation,” says Vilkas.

The researcher illustrates findings with an example of “ADAX”, a company, which produces electric heaters for private usage.

“Company has been continuously introducing modifications of electric heaters which helped “ADAX” to sustain performance. However, they were hesitant to introduce a smart connected heater until many voices started questioning why. The answer was: “We are not ready”. Despite that, the company was developing internal digitalisation capability. After “ADAX” became fluent with intelligence, connection, and analytical capabilities, the time for a smart heater was paved”, says the KTU researcher.

Now new generation heaters are embedded with sensors, connected to the internet, and have “Bluetooth” for easier pairing. They already can be controlled remotely and have other valuable functions.

“As the data on the usage will grow mature, the company will suggest new services. They could promise a prediction of awaiting malfunction, remote monitoring, and repair. Eventually, they can enter the business-to-business market offering industrial companies take over of heating of their premises, guaranteeing lower prices than companies would pay themselves”, says Vilkas.

The researcher suggests that with the capabilities opened by the digitalisation processes, we are standing on the brink of a new era in manufacturing.

“One would say that engineering companies have the advantage over the furniture or textile industries. Maybe. However, smart furniture and apparel may be closer than you would imagine,” says Vilkas.

Research is a part of the “In4Act” project, implemented by the Kaunas University of Technology School of Economics and Business researchers and financed by the European Union project “Horizon 2020”. More about “In4Act”: https://in4act.ktu.edu/